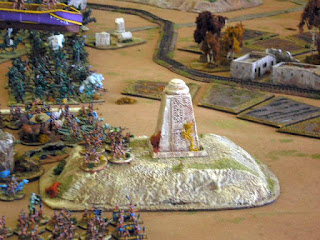 We had plans for Venus, but this army has been waiting long enough, Lizards of Mars! 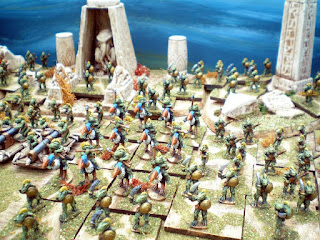 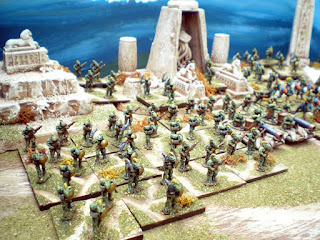 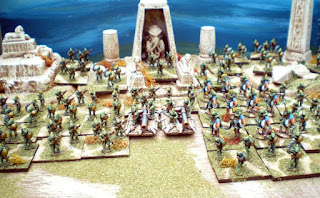 Germans vs French and Italians

I've managed to get a lot of table time in so far for 2015, but very little Martian Empires.
So this weekend the owner of Treefort Games, our local brick and mortar store, asked me if
I could put on a game because PBS might come by to do a little filming! He was hoping for a couple of nice looking games to show off, Charlie Traylor was also running his beautiful Pirate game.Fortunately I had the
weekend off, a rarity these days, so a last minute call went out and the game was on for Sunday.
I went for a 4x12 foot table, a little smaller than are usual 6x12, but it was nicely packed with terrain.
It was Germans vs an Italian /French alliance, with a French and German force facing off in the center and both awaiting reinforcements.  Daniel had brought some nice Blue Moon Victorian civilians, who we labeled 'instigators'. So in addition to fighting each side was trying to round up some of these civilians who were trying to rile up the indigenous natives. If we ran out of time, whichever side had captured the most civilians would win.
It was a pretty bloody fight in the center, with the French and Germans sparring but also trying to get as many civilians as possible. I got to try out the new Heavy Walker, that Mike of Black Hat put out late last year. It is pretty formidable what with 3 shots and all, but it almost went down to those nasty little German rocket troopers. Troy did well with the Italians, probably the best luck anyone has ever had with them, though Rick's Germans beat him to the center.. Which was bad for the French. In the end the center Germans and French had taken a licking but the Germans had captured the most troublemakers. A very fun game.
Oh and PBS did show up and take some pics of the game!
Set up positions.